How to give a slow computer a boost

Animations and fancy visual effects will eat up a whole lot of your processing power – especially on older machines. Turning these off will make your PC look like it’s from the 90’s, but it will be considerably quicker.

On a windows machine:

Step 1: Open the Start menu type ‘Adjust the appearance and performance of Windows’.

Step 2: Click the result under Control Panel, and it’ll open a dialogue menu.

Step 3: You can disable specific visual effects and flourishes from the scroll menu, or you can simply select ‘adjust for best performance’ to turn them all off.

Step 4: Click OK and, after a brief visual recalibration, you should be good to go.

2) Switch your OS to Linux

One pretty drastic option is to get rid of your old operating system and install a Linux or Ubuntu distribution instead. While it’s not ideal for gaming, for simple tasks like word processing, music and surfing the web, it can make ancient hardware feel like a new machine. It’s free, easy to install, and there are enough versions to suit everyone, including low-resource options that will make your computer fly.

One of the most effective ways to rejuvenate your laptop or PC is to install an SSD. Because there are no moving parts in SSDs, the read/write speeds are far superior to older optical (spinning disk) hard drives. Buying one won’t break the bank, but you might have to compromise a little on storage space, as SSDs still cost more per GB than mechanical hard disks. Before you worry about finding your old Windows disks – don’t. It’s easy enough to clone your old disk and existing Windows installation onto your new SSD. Download a free program such as EaseUS Todo Backup Free 8.9, and cloning your old HDD onto a speedy new SSD is a fairly simple affair. And even if you can’t replace your HDD easily, don’t abandon hope – it’s often possible to clone your operating system to an SSD connected via a USB 3 (or Thunderbolt) adapter.

If you’re using Windows Vista or later, and you maybe able to speed up your computer with an inbuilt function called ReadyBoost, which allows you to use an external flash drive to give your computer a little extra memory. This is something of a last resort, however – upgrading your RAM or moving to an SSD will make a much bigger difference. Essentially, ReadyBoost attempts to act as a turbocharger for your system’s RAM. It will use a section of a USB flash drive’s memory for caching, increasing the random read access speed of the hard drive, and helping regularly-used applications to open more swiftly. However, there’s still debate as to the effectiveness of this method. Bear in mind that it’s generally only considered useful if you have less than 2GB RAM and if your main system drive is a mechanical HDD rather than an SSD – solid-state drives are much faster than even the quickest USB 3 flash drives.

Step 2: The Autoplay dialogue box will pop up asking what you want to do with the drive. Select the ‘Speed up my system using Windows ReadyBoost’ option, which will open another window where you can select the amount of space on the device to allocate for boosting.

Step 3: Microsoft recommends using at least as much USB space as you have RAM, but we’d suggest using the whole thing and reserving the drive exclusively for speeding up your computer.

Step 4: Once you’ve selected your desired amount and confirmed the settings, the box will close and your computer will automatically detect and use the drive whenever it’s plugged in.

Older PCs can often have a problem with modern resource and graphics-intensive software. For example, Photoshop can slow less powerful computers down. For this specific example, a less intensive program such as GIMP – an open-source alternative to Photoshop – requires a fraction of the disk space and power, while maintaining a good level of sophistication. Similarly, those with low-powered machines may want to experiment with using a lightweight web-browser. Google’s Chrome is a terrible resource hog, and we’ve seen it bring machines with 8GB RAM to their knees with its greedy memory demands. Other browsers, such as Microsoft Edge in Windows 10, or Firefox and Opera, may give your PC an easier ride. Alternatively, an ad-blocker may help if your PC is really struggling – sometimes the adverts can push older machines over the edge.

If you want a bit more performance for multi-tasking without shelling out on an SSD then a cheaper option is to start looking at some RAM upgrades. If you’re running on a system with under 2GB of RAM, sticking an extra few gigabytes in won’t cost you too much and can make all the difference. Combine a RAM upgrade with an SSD, and it’s safe to say that your old PC or laptop won’t feel quite so old anymore.

SSDs don’t suffer from defragmentation, so you needn’t bother with this step if you have one of those. But if you’ve got an old mechanical HDD then this tip is for you.  One of the most common problems with long-suffering HDDs is disk fragmentation. With repeated use, the information on your hard drive can become scattered, meaning the computer has to work harder to find it. By performing a disk defragmentation, you can neatly reorganise all your information, which can significantly improve your computer’s overall speed.

Step 1: You can find the Disk Defragmenter by going into the Control Panel, navigating to ‘System and Security’ and looking under administrative tools.

Step 2: By using the buttons in the window, you can analyse your disk to see how fragmented it is currently, or just run the process straight away. You will need to perform this for every drive in your computer, so make sure to run the process on all your hard drives. 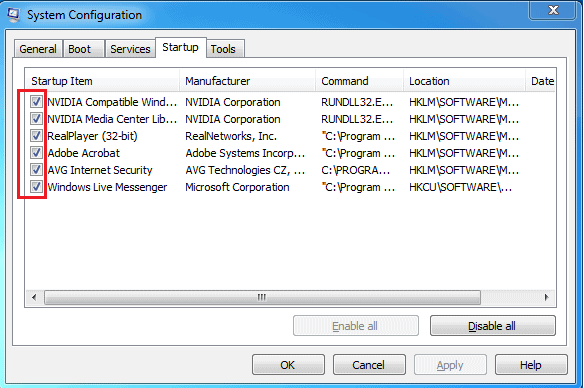 Disabling startup programs is also a great idea. These are programs that boot every time you turn on your computer, and run in the background until you need them.

Step 1: To stop these programs from starting automatically on earlier versions of Windows, open the Start menu and type ‘msconfig’. This will open the system configuration menu. Windows 8 users can find the list of startup programs in the task manager.

Step 2: Switch to the ‘startup’ tab and scroll down the list; you’re looking for anything that you don’t immediately need. Any antivirus services, programs from Microsoft or your PC manufacturer, or background programs you use regularly should be left on. Things like Adobe Reader or any automatic update checkers can safely be unchecked, however.

Step 3: Once you’re happy that you’ve unchecked everything you don’t want, simply click Apply and OK, then reboot your computer to finalise the changes

Even the fastest hardware can get bogged down – there’s no point shelling out for pricey SSD or RAM upgrades if your Windows installation is cluttered with tens or hundreds of programs and apps which you never use. The first thing anyone with an ailing computer should do is to make sure it’s not clogged up with unnecessary data. Over time, various scraps of code build up like digital cobwebs, slowing your machine down. Fortunately, there are many utilities designed to hunt down and remove unwanted files and extensions. One program we particularly like is CCleaner. This free piece of software scours your hard drive for all the pesky files hogging your disk space, including temporary files, internet cookies and unused registry files. An added benefit is the ‘Registry’ tab, allowing you to scan and fix redundancies or other problems in your PC’s registry archive, helping improve speed. In the ‘Tools’ tab you can also uninstall programs, disable startup programs, find out what kind of file takes up the most space on your drive, and even locate duplicate files.

Step 1: Once CCleaner has downloaded and installed, start the program. By default, CCleaner opens to the ‘Cleaner’ tab.

Step 2: From here you can fine-tune the elements you want to clean out. You can choose specific programs or OS components to scan, and even which files you’d like to remove within.

Step 3: If you’re happy with the scan, hit the “Analyse” button to see how much space you could free up. After the scan is complete, make any further adjustments, and then click ‘Run Cleaner’ to remove the files.

Your IT Department offer affordable onsite & remote IT Support services to businesses from our offices in Nottingham.

Thank you to Alphr for some of our info.