Substitute Danny Rose was the hero as he netted the only goal just 3 minutes after coming on to ensure that the Stags left Sincil Bank with all the points. Right-back Hayden White delivered a cross from the right wing following a terrific run and Rose climbed highest to head home from 4-yards out.

Your IT’s sponsored player Alfie Potter was one of three changes to the side that drew 0-0 with Wycombe last Tuesday with Hayden White and Paul Digby both also handed starts. Potter completed a full 90 minutes for the first time this season and will hope to retain his place against Cambridge United next Saturday at the One Call Stadium.

Both sets of fans were in fine voice, creating a terrific local derby atmosphere, as they tried to inspire their respective teams but it was a substitution just before the hour mark by Mansfield boss Steve Evans that was ultimately the turning point in a tight contest. The Stags will be delighted with 3 more points and another clean sheet as they move up to 5th, just 3 points behind the automatic promotion places.

The Stags will be delighted with 3 more points and another clean sheet as they move up to 5th, just 3 points behind the automatic promotion places. 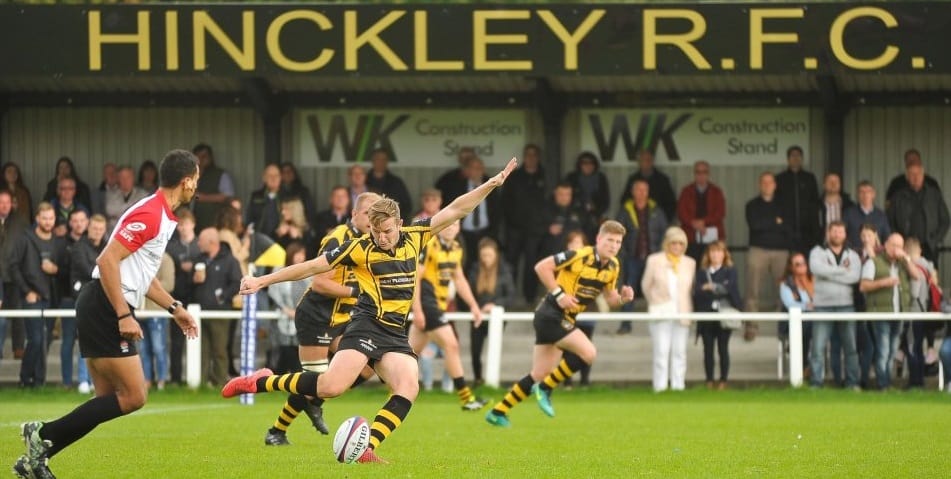 The kicking of Joe Wilson was the difference in a hard-fought local derby with Leicester Lions. Wilsons 100% record of 4 conversions and 3 penalties was vital as Lions outscored Hinckley 6 tries to 4 but they could only convert 2 of the 6.

What was particularly impressive was that the victory was achieved despite Hinckley missing five players who might have been expected to start, showing the strength of the squad this season.

Wilson kicked the first points of the game from the 10-metre line after Lions infringed at the breakdown. However, immediately from the kick-off Lions managed to regain possession and former Hinckley winger Devon Constant scored in the left-hand corner.

Hinckley’s first try came in the 20th minute through James Martin and Ben Marshall then added another as Hinckley appeared to take control, however, Leicester went over again just before the end of the half to leave the score 20-10.

After the break Lions dominated possession and territory and two tries in quick succession, both converted by Biden, put Lions ahead 24-20.

It was breathless stuff and back came Hinckley when after a masterful kick from Joe Glover made 40 metres out of nothing, Luke Coltman took up his normal place hanging at the back of the maul to score the third try.

The bonus point score was again made by Glover, who was having one of his best games in a Hinckley shirt. He took a quick tap penalty on the halfway line and got to the 22 before feeding Wilson to go over under the posts. The score was now 34-24 with around 15 to go.

Showing great spirit Lions went over again to tie the score at 34 all. However, another scrum penalty went Hinckleys way on 22 allowed Wilson to kick the home side to victory.

After the loss to fierce rivals Nottingham Forest last weekend, Derby were looking to bounce back with a win against Huddersfield. However, they fell to another disappointing defeat against a confident looking outfit.

Chances were few and far between in a quiet first half before Sub Emily Heckler opened the scoring in the 55th minute, and that proved to be the difference between the two sides.

That keeper Sarah Morgan was the Ewe Rams Player of the Match gives an indication of the performance, however, they did also force some decent saves at the end and applied some constant pressure in the final few minutes without creating a clear opportunity for an equaliser. The 1-0 win took Huddersfield top of the Premier North Table.

Derby will be looking for both an improvement in performance and result as they face another local rival in Leicester on Wednesday evening at Mickleover Sports.