A very busy Easter period for our sporting partners has seen some mixed results.

Mansfield started with a promising point away at local rivals Notts County. Kane Hemmings kept his head to dispatch a penalty NINE minutes into injury time for the Stags to earn a 1-1 draw after County defender Lewis Alessandra was adjudged to have handled the ball inside the area. This was Mansfields fourth 1-1 draw in a row.

Unfortunately, this was to prove the best result of a frustrating period, as the Stags have gone on to record 4 consecutive defeats.

A trip to a Forest Green Rovers side battling at the wrong end of the table should have been straightforward enough, however, a disappointing performance and 2-0 scoreline which included a red card for captain Krystian Pearce, left new boss David Flitcroft suffering his first loss.

In-form Accrington Stanley were then visitors to One Call Stadium. Stags again found themselves reduced to 10 men, when, in the 13th minute, Mal Benning was given his marching orders following a high challenge on Billy Kee. Despite playing the majority of the affair with a man less, Flitcroft’s side battled valiantly throughout and were the better side for large portions of the game. However, a second-half header from Seamus Conneely was the difference between the two sides as Accrington completed a league double over the Stags. It was Mansfields first back-to-back losses of the season.

Going away to promotion favourites and long-time leaders Luton Town would not have been the trip that Flitcroft would have chosen next but the fixture list can be a cruel mistress and so Stags traveled to Kenilworth Road. Despite the two teams heading into the game off the back of defeats, they had jointly recorded the fewest losses during the season.

Mansfield went into half-time one up after a game-changing two minutes. At one end, Stags’ ‘keeper Conrad Logan made a superb save with his legs to deny Luton’s Elliot Lee. Referee Kevin Johnson awarded Mansfield a free kick in the aftermath of that chance and from the resulting set-piece, the Stags took the lead. Logan pumped the ball forward and he found striker Kane Hemmings who spun defender Scott Cuthbert before slotting the ball past ‘keeper James Shea for his 12th goal of the season.

Needing a win to keep up their hopes of automatic promotion, Luton started the second-half strongly and they grabbed an equaliser in the 61st minute. Striker Lee Collins turned the ball home from inside the area after being picked out by Pelly-Ruddock Mpanzu. That kept the Hatters in the ascendancy and they got their winner with 20 minutes to go. Logan was unable to keep hold of Alan Sheehan’s dipping free-kick and Glen Rea, on as a first-half substitute, reacted quickest to put the ball in the back of the net.

A home game against Crewe looked like a decent opportunity to halt the slide and get the Stags promotion bid back on track. However, a disastrous first half-an-hour minutes saw Mansfield trailing 4-1, and at half-time, they looked to be limping towards a damaging defeat. Crewe took the lead in the seventh minute when James Jones found the bottom corner with a well-struck effort. Then, three minutes later, it was 2-0 as Jordan Bowery turned the ball in from close range. Mansfield halved the deficit through Lee Angol but Crewe restored their two-goal advantage in the 25th minute through Harry Pickering before Charlie Kirk made it 4-1 two minutes later.

Mansfield made two changes at the break, introducing forwards Ricky Miller and Danny Rose, and the added attacking options helped Stags to two second-half goals to cut the deficit. The first arrived in the 50th minute as Kane Hemmings headed in his 13th goal of the season at the back post. The Stags had to wait until the 77th minute for their third and it was Miller who got it, converting from close range after winger CJ Hamilton’s shot was deflected into his path. Mansfield threw everything at Crewe but there was to be no fourth goal despite the Stags having a plethora of chances.Flitcroft will be encouraged by the second-half performance against Crewe, but 4 defeats in a row leaves the Stags outside the play-off places as we approach the business end of the season.

Hinckley followed up defeat against Oatley with a result that looks to have put an end to any promotion hopes for the season. Hornets suffered a last-minute defeat to bottom club Luctonians in windless and dry conditions, and on a blameless surface, Hinckley squandered a 29-8 lead in a second half display that will have George Chuter and his coaching team tearing their hair out.

Luctonians actually scored first, when, completely against the run of play, a wayward pass from Tak Osaki went straight to Luctonians Frank Kelly. The wingman grabbed his opportunity well, running virtually the length of the field to touch down for the opening score.

Hornets regrouped and 3 minutes later were level. A penalty for a high tackle 35m from the Luctonians line gave Joe Wilson the opportunity to push the ball into the corner, and Gaz Turner went over from the resulting line-out.

Lucts did snatch the lead back 6 minutes later, with a penalty from Sam Boxhall, but the rest of the half belonged to Hornets.

Captain Alex Salt literally rolled over the line on 25 minutes to take the lead with Joe Wilson converting and. with the clock showing 6 minutes to the break, Callum Dacey went over in the corner from a penalty scrum after Lucts had lost their winger to the bin.

From the kick-off, a twenty plus phase passage of play eventually saw Ben Marshall force his way over for the try which Wilson again converted to give Hinckley a 24-8 lead and a four-try bonus point going into the break. Lucts also lost a second man to the bin, this time for collapsing a maul.

With Lucts down to 13, Hinckley pressed their advantage from the kick-off as a break from Mitch Lamb put Josh Smith over in the corner to take a 29-8 lead. Hinckley seemed rampant.

But Lucts weren’t going to lie down, and the game entered a ten minute period which ultimately turned the match. Hornets first saw Lewis Snowden carded for collapsing a maul. Lucts’ Frank Kelly then forced his way over in the corner, despite a desperate Hinckley high tackle, for his second unconverted try. A brief fracas followed as some of the Lucts players made their displeasure at the high tackle known, and, after a lengthy debate by the three officials, Gaz Turner was carded for his part in proceedings. Hinckley themselves were now down to 13.

They never recovered as Luctonians saw their opportunity. Kelly went over again on 56 minutes, this time under the posts, for his hat-trick and Boxhall converted to take the score to 20-29.

Wilson did grab a penalty to give Hinckley a little more breathing space but with the penalty count mounting and Hinckley kicking away what little possession they secured, the momentum was most definitely with Lucts.

A dropped ball from Hinckley on halfway was hacked on by Lucts and despite good initial defensive work from Callum Dacey, a poor clearance kick allowed Luctonians to run the ball back over the line to bring them within a score.

With just 3 minutes showing on the clock a succession of penalties eventually saw Lucts put one over from in front of the posts to bring them within 4.

Yet another penalty. this time for offside, handed possession back to Lucts from the kick-off and they advanced steadily downfield as Hinckley’s discipline seemed to completely disintegrate. The net result was Lucts, in the form of winger Josh Watkins, crossed in the corner to give the home side a one-point lead with only stoppage time remaining.

Hornets did have one last throw of the dice when Lucts were penalised on their own 10m line and Wilson had a shot at goal but the attempt went wide and the home crowd erupted as the referee blew for time with the final score Luctonians 33 – Hinckley 32.

The defeat leaves Hinckley with little to play for. Fifth in the table and 11 points behind 2nd placed Sedgeley Park with only 5 games to play. 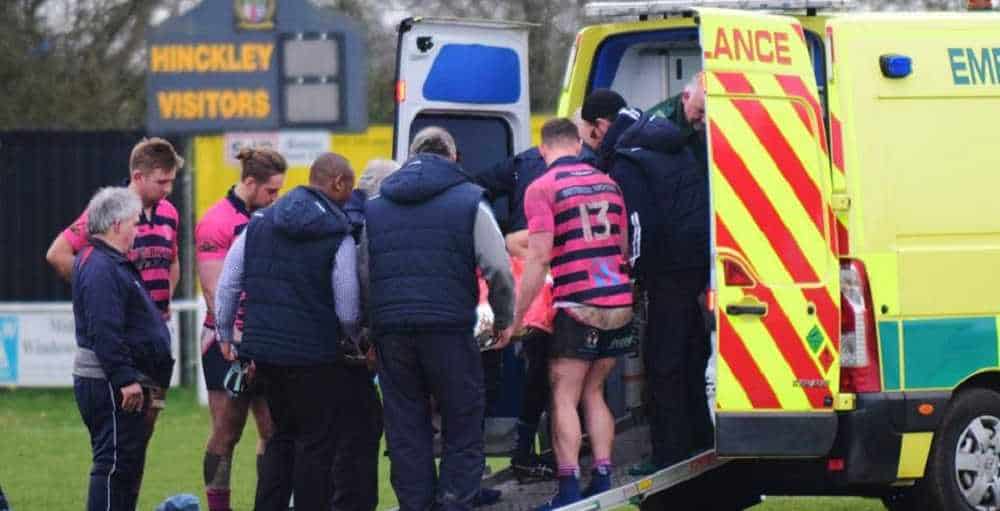 However, released from the pressure for results, Hornets returned to winning ways beating fourth-placed Stourbridge 26-0 at Leicester Road.

Ben Marshall scored the first try, converted by Joe Wilson in the 17th minute which was added to by Dave Peck in the first-half leaving Hinckley 12-0 up. In the 50th minute, Mitch Lamb scored, converted by Wilson, and 6 minutes later Joe Glover went over and converted himself as the Hornets threatened to run riot.

However, the game was marred by a nasty injury to Stourbridge fly-half Chris Scott who suffered several broken ribs and a bruised lung leading to the referee calling the game early. As more than 75% of the game had been completed the result stands but the injury definitely took the gloss from the win. 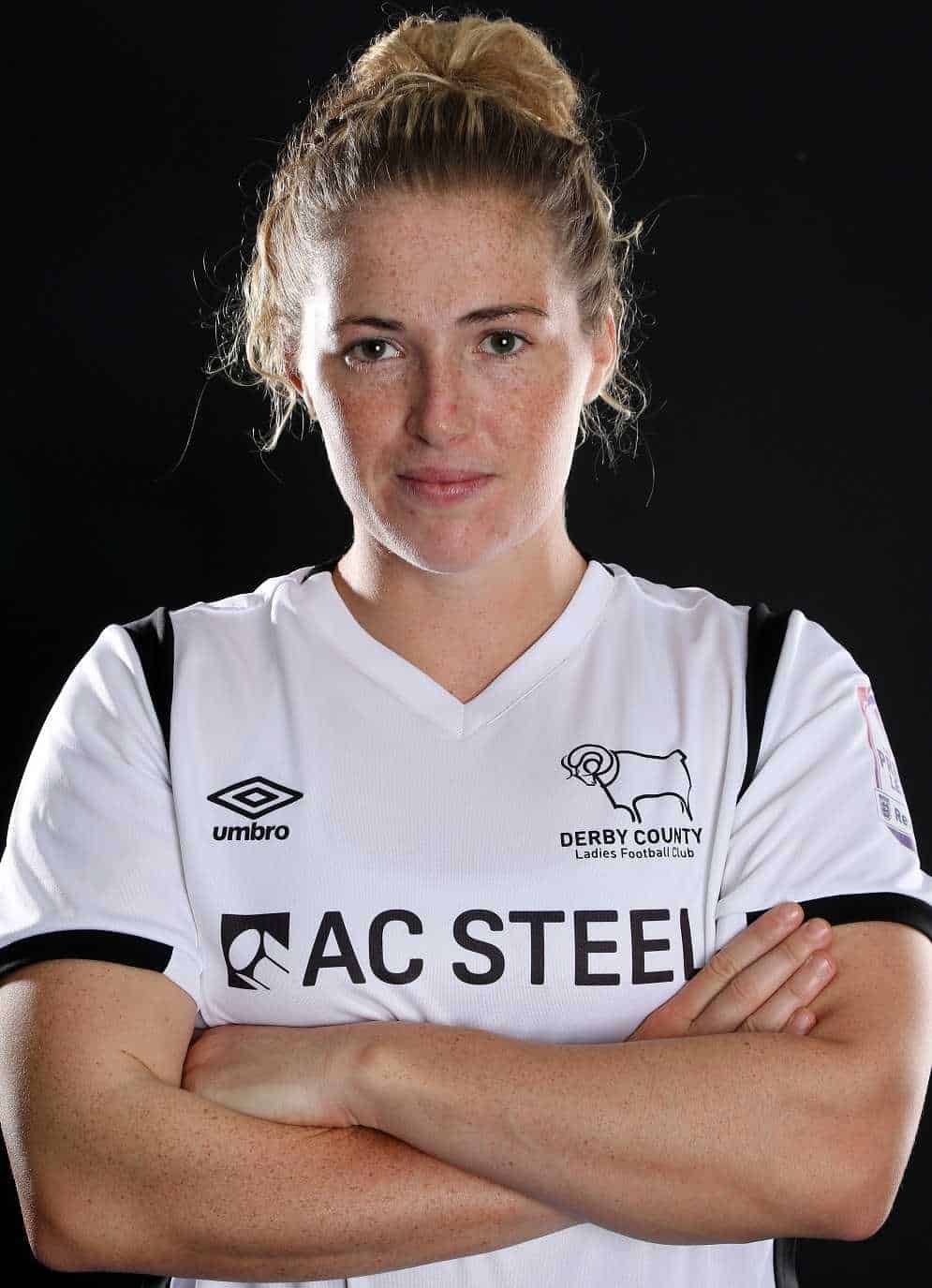 Derby County Ladies recorded a professional win over bottom of the table Guiseley Vixens in their first fixture of the period but couldn’t stop league favourites Blackburn Rovers.

The Ewe Rams started brightly with both Cam Newton and Andi Bell having success down the wings and running at the Vixens defence, though sound defending kept the scores level in the opening 10 minutes.The Ewes took the lead soon after when the ball was won on the right and good interchange between Shannon Weston and Amy Sims, saw the latter loop a 30-yard effort over the Vixens goalkeeper for a deserved lead.

That goal gave Derby confidence with Nikki Ledgister close to doubling the lead before a Cresswell effort was blocked when heading for goal.

The home side began to find their feet and saw half-chances fall to new signing Emily Heckler, though goalkeeper Sarah Morgan comfortably saved a couple of efforts from range from the prolific former Huddersfield striker as the Ewes went into the break in front.

The opening 15 minutes of the second-half saw the Vixens take the game to the visitors as they searched for a way back into the game, though the Derby defence was holding firm and keeping the home side frustrated.

That defensive display proved vital as midway through the second-half, Lauren Cresswell found herself standing over a free-kick from the edge of the area and thumping an unstoppable 20-yard effort home to double the lead.

As Guiseley went in search of a goal that could have opened up a comeback, the game got stretched with both sides having half chances as Heckler had more chances from distance, whilst bell was thwarted by the Vixens goalkeeper racing off her line to clear.

The Ewe Rams saw out the danger and picked up a vital three points and a morale-boosting away win to cement their mid-table position.