Mansfield Town FC continued their run of form with a draw in Sky Bet League Two and now sit in a play-off place. Hinckley experienced home defeat for the first time this season and Derby County Ladies returned to action with a disappointing SSE Women’s FA Cup exit. 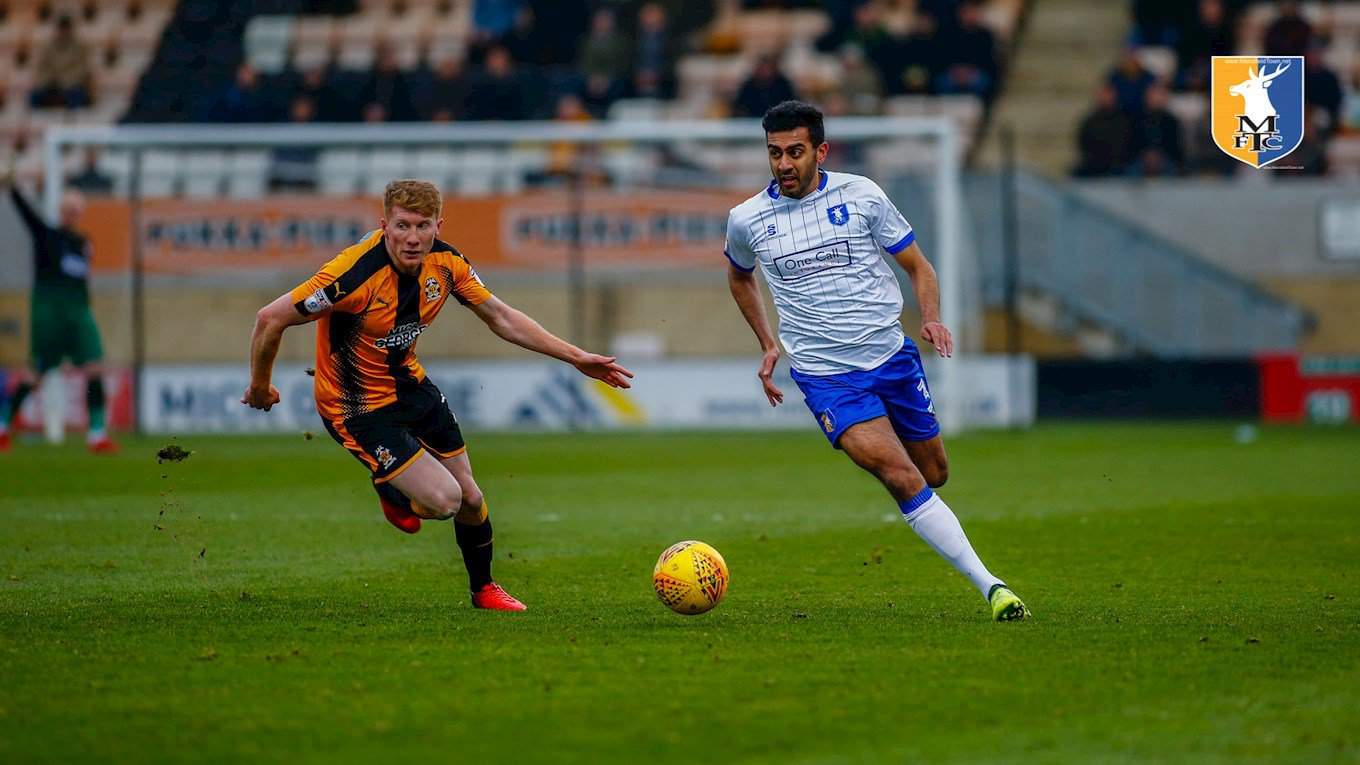 Mansfield Town stretched their impressive run to just one defeat in 20 games after a hard-working performance saw them secure a 0-0 draw away at Cambridge United on Saturday.

In a very evenly matched first period Cambridge had the best chance in the 37th minute when full-back Jake Carroll blasted over from just outside the six-yard box after a good passing move by the U’s.

Striker Billy Waters also looked lively for the hosts but he was unable to find a breakthrough. At the other end, Mansfield left-back Mal Benning saw two efforts from distance go over whilst top scorer Danny Rose curled a shot just wide.

If the hosts had the better of the first half, it was Mansfield who enjoyed the better spells in the second as the Stags went close on several occasions. Home goalkeeper David Forde had to be at his best to palm away an Alex MacDonald free-kick whilst Rose thought he had opened the scoring from inside the six-yard box but his effort was ruled out for offside.

The draw was a fair result in what was a closely fought game between evenly matched opposition. The result keeps Mansfield in the final play-off place, just 2 points behind Accrington who occupy third and the last of the automatic promotion places. However, there are just 5 points between 3rd and 11th in what is turning out to be a very competitive and close fought division.

Hinckley fell to a 23-26 defeat to Sedgley Park at Leicester Road, ending their 100% home record.

Hinckley got off to a good start, Tom Wheatcroft going over for the first points of the game with Joe Wilson adding the conversion. Wilson then kicked a penalty before Wheatcroft struck a drop goal, Hinckleys first since 2012,  to put the home side 13-0 ahead.

But back came Sedgley Park with 2 tries, 1 converted, before half-time to make the score 13-12.

First blood in the second-half went to the visitors with a further converted try. Hinckley responded with a Wilson penalty, but the same player couldn’t repeat the trick moments later.

Park went over again and converted for a 10 point lead with under 10 minutes left and it looked game over at 16-26. But Hinckley showed great spirit and bravery to take the game all the way and almost pull off an unlikely victory.

First, the home side shunned a penalty and took the scrum which resulted in a try by Gareth Turner, converted by Callum Dacey. 23-26 with 3 to go.

Hinckley then got a penalty but went for the corner rather than kick for goal in a massive call from the captain. Unfortunately on this occasion fortune did not favour the brave and Hinckley fell for defeat and drop to second in the league behind pre-season favourites Sale, who are the next visitors to Leicester Road following next weeks trip to Sheffield.

Derby County Ladies fell to a disappointing 3-1 defeat to Brighouse Town Ladies in the SSE Women’s FA Cup to exit the competition at the 3rd Round stage.

With a trip to WSL1 side Sunderland up for grabs, it was the Northern Division One side that dominated proceedings to make a deserved trip to the Black Cats in the fourth round.

Manager John Bennett was boosted with the return of a number of 1st team players, with Kirsty Allen making her first appearance in the squad since joining the club in the summer. There was also a return to the line-up for club captain Hannah Ward after missing the previous two months with a niggling knee injury.

The visitors made the early running with a volley narrowly missing the target after the Ewe Rams had failed to clear the ball and moments later, Brighouse took the lead when a corner wasn’t cleared and Jodie Redgrave hooked the ball past Sarah Morgan in the Derby goal.

The Ewe Rams slowly began to grow into the game but play continually broke down in the final third and opportunities were few and far between. However, the home side were finally given a lifeline just before the break. A mistake in the Brighouse defence allowed Nikki Ledgister to snatch the ball and drive into the visitors’ box before laying off to Lisa Giampalma, Giampalma produced a well directed shot to level things at 1-1 going into half-time.

The home side came out after the break looking much brighter but found themselves behind to a superb volley from Redgrave on 55 minutes after more indecisiveness in defence, saw Brighouse restore their lead.

The goal galvanised the visitors who kept Derby at bay and looked to kill off the tie with a third goal. The home side were wasteful in possession and struggled to create any opportunities with substitute Molly Johnson’s 20-yard effort the closest the Ewe Rams came to an equaliser.

With the clock ticking down, Brighouse added the gloss to a well-deserved victory as superb Annabelle Cass effort from the edge of the box effort sailed past Morgan to seal the victory.