Hinckley RFC continued their perfect start to the season with an impressive 24-3 victory at Huddersfield, whilst Mansfield Town ran out 4-1 winners at home to Grimsby. But Derby Ladies fell to a disappointing defeat at local rivals Nottingham Forest. 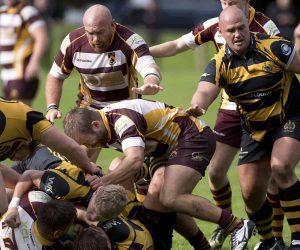 Tries from Tom Wheatcroft and Steve Harvey along with two conversions and a penalty from Joe Wilson mean that Hinckley are two wins from two in the National League Division Two North and the good news continued as they also welcomed back to the lineup County Captain Luke Coltman.

Although it is very early days results so far leave Hinckley third in the table and full of confidence going in to next weeks local derby with Leicester Lions.

Mansfield ran out comfortable winners in a game of three penalties at the one call stadium on Saturday. Two goals from skipper Krystian Pearce and two successful spot kicks from striker Lee Angol put Mansfield in a commanding position before Grimsby converted a penalty themselves late on failed to take the gloss off an excellent team performance from The Stags.

A scrappy opening half hour came to life when David Mirfins impressive run was halted by a trip from Grimsby defender Zac Mills and referee Paul Tierney had no hesitation in pointing to the spot. Angol stepped up to take what was the Stags’ fourth spot kick of the season – the previous three being missed by different takers – and the former Peterborough United man made no mistake as he whipped the ball home from 12 yards, giving McKeown no chance.

Stags then doubled their lead in the 54th minute when defender Pearce volleyed home Joel Byrom’s corner from around six yards out. Pearce added his second via a heavy deflection ten minutes later to put Mansfield firmly in control and when Angol was brought down with 10 minutes to go he stepped up to add his second of the spot.

Five minutes later Grimsby were awarded a penalty of their own after substitute Diallang Jaiyesimi cut in from the left and was brought down by Rhys Bennett. Striker Sam Jones took control of the situation and rolled it under an unlucky Conrad Logan, who guessed the right way but couldn’t make the save.

Your IT sponsored player Alfie Potter made a late substitute appearance as Mansfield recorded an impressive win.

Andi Bell had possibly the best chances for Derby County Ladies, including a close offside call, as an uncharacteristically flat performance led to a 1-0 defeat to Forest at Basford United.

Both sides struggled to cope with the blustery conditions but Forest adapted better whilst Derby struggled to get there passing game going and fell behind on the hour when a high ball bounced nicely for Hazzana Parnell to nick in front of on-rushing Derby keeper Sarah Morgan to chip the ball into the net and give the home side the lead.

Derby will need to regroup with the visit of Huddersfield next who lost for the first time this season 2-1 to Blackburn Rovers this weekend.