All three of our sporting partners recorded wins over the weekend with the most impressive being Derby County Ladies win over local rivals Nottingham Forest, coming from two goals down to secure the 3 points. Hinckley continued their impressive season with a win away at Otley, whilst Mansfield extended their own unbeaten run to seven games. 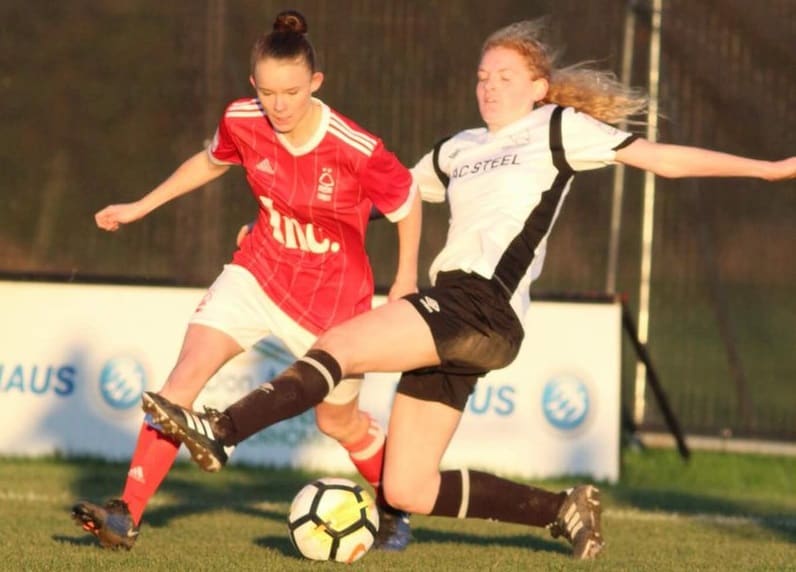 A dramatic comeback saw the Ewe Rams secure victory after trailing by two goals to nil with just half an hour remaining, in a performance manager John Bennett hailed as “Absolutely brilliant!”

On an afternoon of high drama, Derby started brightly at the Don Amott Arena, Andi Bell going close with an opportunist looping volley which landed on the roof of the net.

Despite the early Derby pressure, the Reds settled down and, following a series of corners from the away side, the increasing pressure finally told with Samantha Conroy opening the scoring for Forest.

The half culminated with another effort from the Ewe Rams when full-back Johnson struck a long-range free-kick narrowly wide, yet for all the pressure Derby trailed and just moments into the second half things got worse for the Ewe Rams.

Goalkeeper Morgan misplaced a clearance, with the visitors Natasha Hudson capitalising. The Forest player took time to set herself before clipping the ball over Morgan to double the away teams advantage.

However, the Derby heads refused to drop and with just over an hour gone the Ewe Rams were given a lifeline when right-back Amy Sims burst into the penalty area and fired home past the Nottingham Forest goalkeeper.

This momentum was now with the hosts and the equaliser came when Molly Johnson showed both precision and power to thunder home from a free kick.

Not content with a point, John Bennett’s side went in search of the winner but may have thought their chance had gone when Kelly Kennaugh could only flick over at the near post from a corner.

However with just 5 minutes remaining Derby deservedly took the lead – albeit in controversial circumstances. Leanne De Silva’s strike from the edge of the area cannoned down off the crossbar with the officials awarding the goal, deeming the ball to have crossed the line.

Wild scenes of jubilation followed, but these were swiftly extinguished with Forest awarded a late penalty.

But the feeling of euphoria was soon recaptured as keeper Sarah Morgan became the hero of the hour saving superbly from Summer Holmes’ spot kick to give the Ewe Rams victory.

Hinckley ran out 38 – 15 winners at Otley running in 5 tries and adding 5 conversions and a penalty.

Playing this week at the historic Otley ground, a venue where the All Blacks lost to the Northern Division in 1979 and which hosted a game in the 1991 World Cup, Hinckley traveled having been well beaten in the last visit back in February. However, this was not to be the case this time.

The first try came after 13 minutes when a loose kick was fielded 70 metres out by Callum Dacey who stepped with ease through the Otley line chase and then just about had enough pace to get around the fullback to finish next to the posts. Joe Glover kicked the conversion and a penalty soon after before the second try came from Mitch Lamb after an inside offload from Sam Driver.

Driver scored Hinckley’s third try himself just before halftime with another break through the Otley midfield – he had to fight off the attention of the fullback but he just about held up to finish. The half time score was left at 24-8 with Otley scoring a try and a penalty of their own.

Long range tries were replaced with short range ones in the second half. The first score was the bonus point one – it went to Luke Coltman from the shortest of ranges to take the score to 31-8 with the conversion, and taking the game out of sight of the home team.

Hinckley’s final try came from Tom Wheatcroft, who pounced after a scrum turnover just 5 metres out from the home line lead to Glover being able to give the fly half a relatively comfortable finish having been set up to defend the blindside. Glover again kicked the extras finishing the day with 6/6

Otley did earn a penalty try close to the end of the game however it was of little consequence – the win now means Hinckley sit second in the National League 2 North just 2 points behind top of the league Stourbridge who lost again this week.

Mansfield Town produced an excellent display on an exhilarating afternoon at the Ricoh Arena as winger Alex MacDonald’s thunderbolt earned a 1-0 win against Coventry City.

It was an entertaining and closely-fought first half with both sides going close to breaking the deadlock. Mansfield came nearest through top scorer Danny Rose who curled a shot onto the post in the 22nd minute whilst Stags’ ‘keeper Conrad Logan did well to deny Coventry front two Marc McNulty and Jordan Ponticelli.

The second half proved to be less lively as both sides cancelled each other out. Coventry saw a header cleared off the line but it was Mansfield who went on to secure the win, as Alex MacDonald hit a shot which was worthy of winning any game, finding the back of the net from range with a swerving effort in the 84th minute to extend the Stags unbeaten run to seven games and move them to within two points of the play-offs.