Derby and Hinckley are consistently inconsistent!

With Christmas Breaks out of the way and January done and dusted it is time to catch up with our sporting partners. Derby County Ladies have put a series of disappointing results behind them to stay on course for a top half finish in the league, however FA Cup hopes are over for another season. The Foundation Team continue to grace the Your IT sponsored shirts as they remain top of the league despite a first defeat of the season.

With the oval ball Hinckley are undefeated at home but poor away form is hampering any possible promotional push this season.

The Ewe Rams progressed to the Third Round of the Women’s FA Cup with a 2-0 victory over Guiseley Vixens to end a run of three straight defeats and earn a place in the next round.

Goals from Nikki Ledgister and Stephanie Smith ensured the Ewe Rams got their season back on track in a battling performance.

In an all FA Women’s National League Northern Division tie, Derby County Ladies weren’t able to conquer Stoke City Ladies and crashed out of the SSE Women’s FA Cup after a 2-1 defeat.

After a long Christmas break, Natasha Tezgel and substitute Hannah Keryakoplis’ goals were the difference despite a spirited effort from the Ewe Rams.

Derby hit double figures in a stunning 10-0 win at Bradford City Women in the FA Women’s National League Northern Division to move into the top half of the table. The Ewe Rams picked up their first win of 2019 in spectacular fashion and boost the confidence of a team that remains in with a realistic chance of finishing in their highest ever league position. 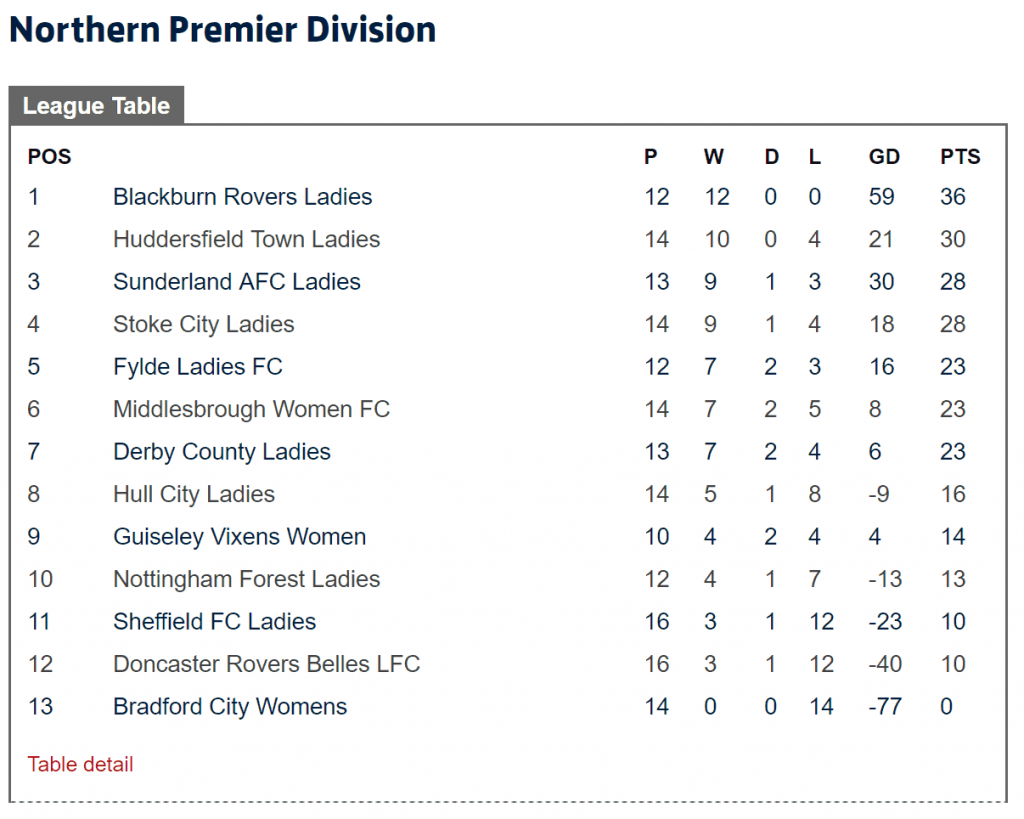 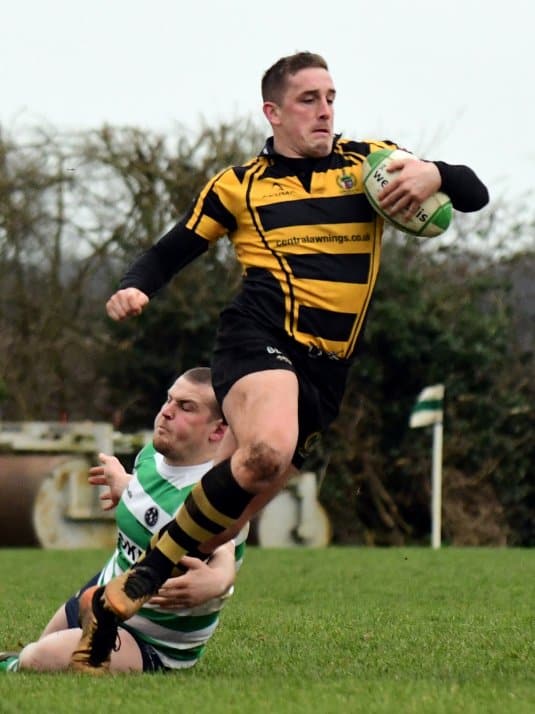 Hinckley RFC have been busy since our last update, and it is far to say the only consistent thing about their form this season has been the inconsistency! The graphic below illustrates this perfectly:

Scores and scorers from the beginning of December to the end of January.

1st December: Macclesfield 33 Hinckley 21 – Tries from Wilson and Turner, both converted by Wilson plus a penalty try.

5th January: Wharfdale 20 Hinckley 33 – two tries from Dacey and 1 each from Glover and Skerrit, 3 Wilson conversions and a penalty try.

19th January: Hinckley 15 Stourbridge 7 – Tries from Hough and Philip added to by Wilson with a conversion and a penalty

The Hornets remain unbeaten at home but in complete contrast have lost 7 of 8 away game which leaves them in 6th place, 10 pints behind second placed Chester who visit Leicester Road next week. A promotion challenge is not impossible but looks unlikely, especially if the away form doesn’t improve massively. 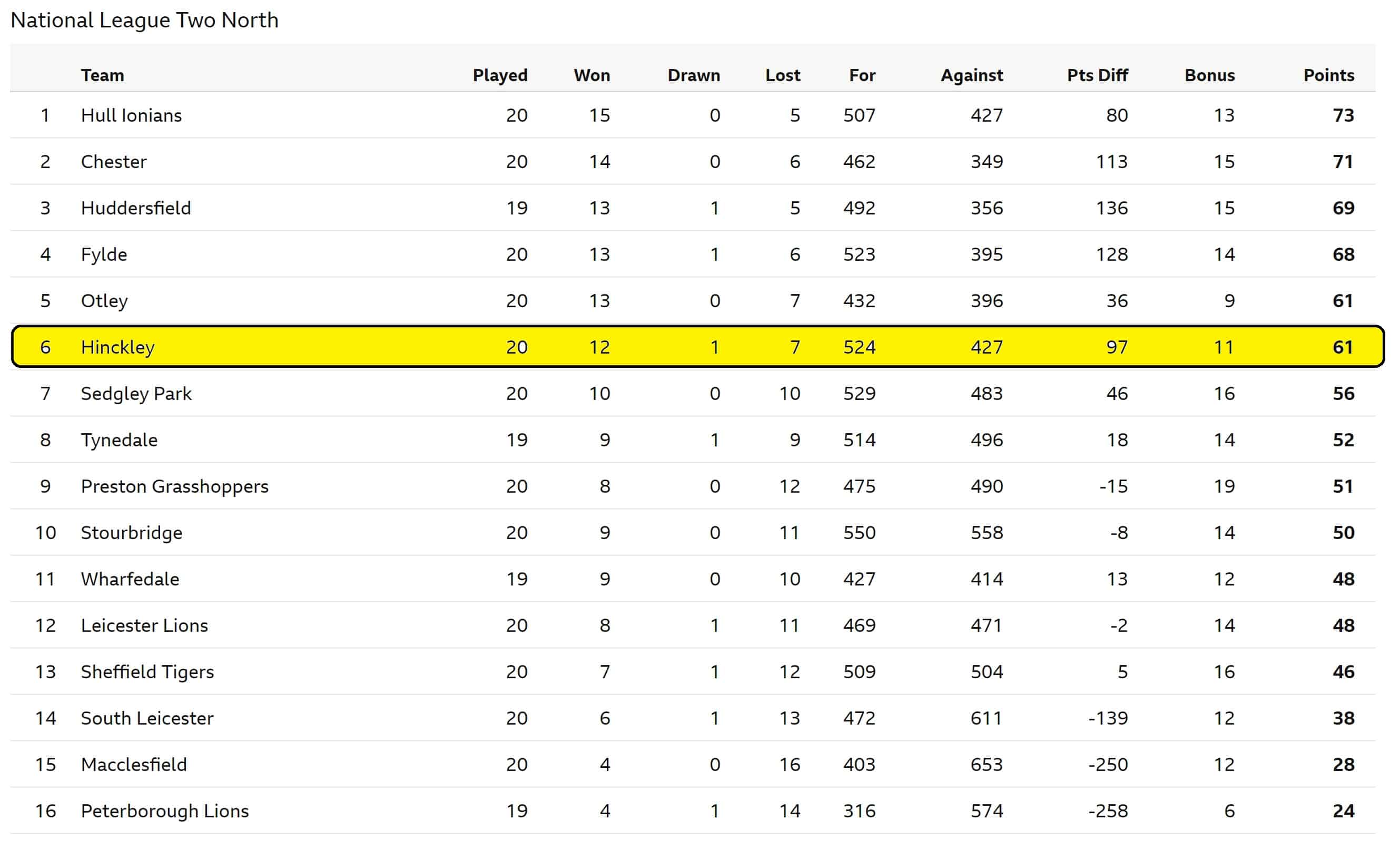